Several government buildings were set ablaze in scattered sections of Haiti and one demonstrator was killed in violent protests ignited by the release of final legislative election results, officials said Saturday.

Street demonstrations and clashes between factions troubled several towns around the Caribbean country, though the crowded capital of Port-au-Prince and most other areas of the country of 10 million people were peaceful.

In parts of northern and southern Haiti, angry partisans insisted that the results released late Friday by the much-criticized electoral council did not reflect the will of voters.

Protests against the election results date back to the end of October after some candidates contested the integrity of the vote. Presidential and legislative runoff elections are scheduled to take place Dec. 27 to settle the winners, despite numerous accusations of fraud and manipulation of results.

Police Inspector Guytho Noel said an 18-year-old protester was fatally shot when two factions clashed on the streets of the northeastern town of Terrier Rouge. Demonstrators burned an elections office, set tire barricades aflame and smashed the windows of a shop, he said.

In the nearby town of Ferrier, another elections office burned and the mayor’s office was lit on fire. In northwestern Haiti, some houses and schools were set ablaze. Police also reported scattered unrest in a few parts of southern Haiti.

The Haitian National Police said on Saturday it was trying to restore order. 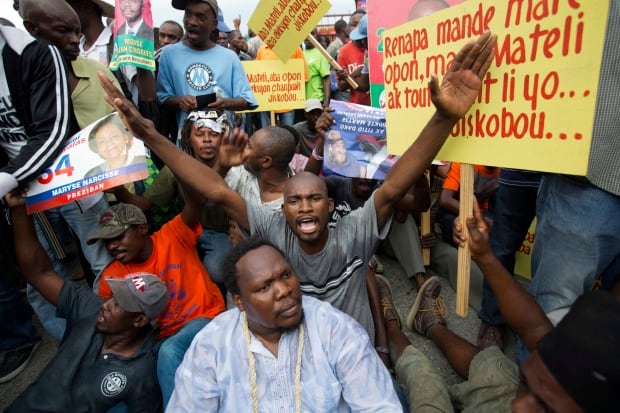 The long-delayed parliamentary results were released just over a week before the Dec. 27 runoffs.

All 10 sitting members of Haiti’s Senate had urged President Michel Martelly to prevent electoral authorities from issuing final results for legislative races until a commission could be set up to verify the integrity of the vote.

‘It will take time for some Haitians to understand that democracy means that some candidates win, other candidates lose.’– Gregory Mayard Paul, Tet Kale spokesman

A series of elections this year is picking a new president, two-thirds of the 30-seat Senate, the entire 119-member Chamber of Deputies and numerous local offices.

Gregory Mayard Paul, a spokesman for Martelly’s Tet Kale party, noted Saturday that there have never been elections without street protests in Haiti’s young democracy. The first genuinely free elections in Haitian history took place in 1990, but the transition to democracy has been rough.

“It will take time for some Haitians to understand that democracy means that some candidates win, other candidates lose. It doesn’t mean you should go out and burn tires and destroy things if you are unhappy with the results, but not everyone understands this yet,” Paul said.

In the 2010 elections, thousands of Martelly’s furious supporters set up flaming barricades, torched buildings and smashed windows when preliminary results showed that he was apparently eliminated from the presidential runoff.

While international observers have endorsed results from the first two rounds of this year’s elections, an array of rights groups, local election monitors and political factions allege they were so marred by fraud that their validity is in question.