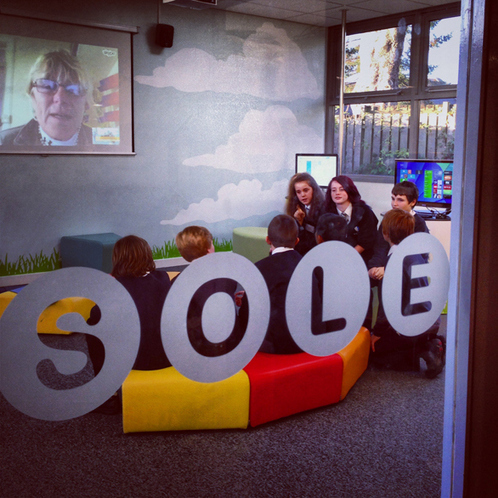 Sugata Mitra has opened the doors of the world’s first School in the Cloud. A look at it and what happens there.

Sugata Mitra has opened the doors of the world’s first School in the Cloud.

Located inside George Stephenson High School in Killingworth, England, this one-room learning lab is a space where students can embark on their own learning adventures, exploring whatever questions most intrigue them. Students even designed the interior of the space — which has colorful beanbags scattered throughout and (very appropriately) fluffy clouds painted on the walls.

Sugata Mitra: Build a School in the CloudOn the glass doors of the lab is the acronym “SOLE,” which stands for “Self-Organized Learning Environment.” It’s a concept drawn from Mitra’s TED Prize wish, in which he offered up a new vision of education that pairs the vast resources of the Internet with children’s innate sense of curiosity. SOLEs are a minimally invasive education technique that lets kids puzzle through big questions on their own, teaching each other in the process. This method can have stunning results. (Read a Wired story on that.)

Since Mitra’s TED Talk was posted online, more than 40,000 people have downloaded the SOLE Toolkit to bring the method into their homes and classrooms. But Mitra’s plans are even more ambitious — with his $1 million TED Prize seed money, he is opening up a series of seven learning labs, two in the United Kingdom and five in India. The Killingworth lab is the first.

The Killingworth School in the Cloud opened its doors on November 22, with a group of students investigating the question: “Who invented algebra?” As the students gathered around computers and began their research, they were guided by an online mediator from the “Granny Cloud,” which Skypes retired teachers into the lab not so much to instruct the students but to offer them encouragement. Appearing on a large screen on the wall, this “Granny Cloud” volunteer appeared almost life-sized.

A look at the interior of the first School in the Cloud, which was designed by students.

Amy Dickenson’s year 7 class took part in the learning lab’s first session, and was thrilled to see her students unpacking big questions. She says, “I believe strongly that this way of teaching — engaging students and inspiring wonder, and at the same time creating independence and self-motivation — has to be the way forward for education today.”

The Killingworth School in the Cloud is run by a committee of 12-year-old students, who manage a schedule to let different classes and groups use the lab in time slots before, during and after school. The lab is, of course filled with computers and touchscreen devices, as these are the tools students use to do their detective work. This lab is the first live demo of the School in the Cloud web platform, which not only connects labs to the “Granny Cloud” but also serves as a community foundation for SOLE practitioners and contains an evolving library of guides and resources. Microsoft and Skype are the core technology partners for this digital platform; Made By Many is the co designer and development partner; and IDEO assisted with design research.

To read more about the School in the Cloud, visit the SOLE Stories Tumblr »

The learning lab has both computer stations and an area for group discussion.