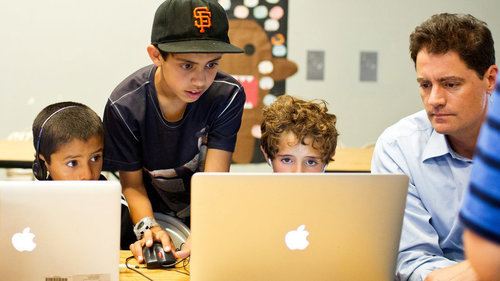 Schools are signing up to teach computer coding, which some view as a basic skill for today, and the tech industry-backed group Code.org is pushing basic coding even for the very young.

“I’m a little afraid he’s falling behind,” his mother, Wendy Lisle, said, explaining why they had signed up for the class at Strawberry Point Elementary School.

The event was part of a national educational movement in computer coding instruction that is growing at Internet speeds. Since December, 20,000 teachers from kindergarten through 12th grade have introduced coding lessons, according to Code.org, a group backed by the tech industry that offers free curriculums. In addition, some 30 school districts, including New York City and Chicago, have agreed to add coding classes in the fall, mainly in high schools but in lower grades, too. And policy makers in nine states have begun awarding the same credits for computer science classes that they do for basic math and science courses, rather than treating them as electives.

There are after-school events, too, like the one in Mill Valley, where 70 parents and 90 children, from kindergartners to fifth graders, huddled over computers solving animated puzzles to learn the basics of computer logic.

It is a stark change for computer science, which for decades was treated like a stepchild, equated with trade classes like wood shop. But smartphones and apps are ubiquitous now, and engineering careers are hot. To many parents — particularly ones here in the heart of the technology corridor — coding looks less like an extracurricular activity and more like a basic life skill, one that might someday lead to a great job or even instant riches.

The spread of coding instruction, while still nascent, is “unprecedented — there’s never been a move this fast in education,” said Elliot Soloway, a professor of education and computer science at the University of Michigan. He sees it as very positive, potentially inspiring students to develop a new passion, perhaps the way that teaching frog dissection may inspire future surgeons and biologists.

But the momentum for early coding comes with caveats, too. It is not clear that teaching basic computer science in grade school will beget future jobs or foster broader creativity and logical thinking, as some champions of the movement are projecting. And particularly for younger children, Dr. Soloway said, the activity is more like a video game — better than simulated gunplay, but not likely to impart actual programming skills.

Some educators worry about the industry’s heavy role: Major tech companies and their founders, including Bill Gates and Facebook’s Mark Zuckerberg, have put up about $10 million for Code.org. The organization pays to train high school teachers to offer more advanced curriculums, and, for younger students, it has developed a coding curriculum that marries basic instruction with video games involving Angry Birds and hungry zombies.

The lessons do not involve traditional computer language. Rather, they use simple word commands — like “move forward” or “turn right” — that children can click on and move around to, say, direct an Angry Bird to capture a pig.

Across the country, districts are signing up piecemeal. Chicago’s public school system hopes to have computer science as a graduation requirement at all of its 187 high schools in five years, and to have the instruction in 25 percent of other schools. New York City public schools are training 60 teachers for classes this fall in 40 high schools, in part to prepare students for college. 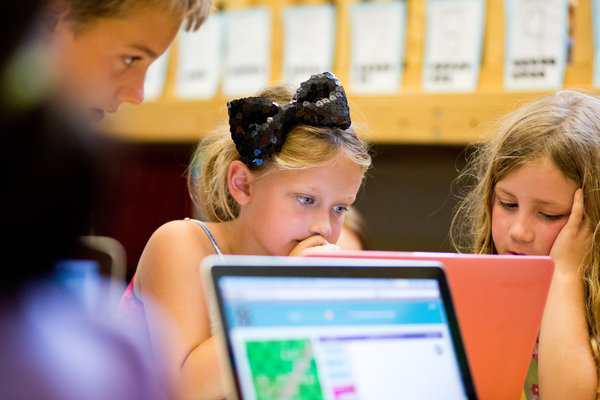 “There’s a big demand for these skills in both the tech sector and across all sectors,” said Britt Neuhaus, the director of special projects at the office of innovation for New York City schools. The city plans to expand the training for 2015 and is considering moving it into middle schools.

The movement comes with no shortage of “we’re changing the world” marketing fervor from Silicon Valley. “This is strategically significant for the economy of the United States,” said John Pearce, a technology entrepreneur. He and another entrepreneur, Jeff Leane, have started a nonprofit, MV Gate, to bring youth and family coding courses developed by Code.org to Mill Valley, an affluent suburb across the Golden Gate Bridge from San Francisco.

Parents love the idea of giving children something to do with computers that they see as productive, Mr. Pearce said. “We have any number of parents who say, ‘I can’t take my kid playing one more hour of video games,’ ” he said. But if the children are exploring coding, the parents tell him, ” ‘I can live with that all night long.’ ”

The concept has caught on with James Meezan, a second grader. He attended one of the first “Hour of Code” events sponsored by MV Gate in December with his mother, Karen Meezan, the local PTA president and a former tech-industry executive who now runs a real estate company. She is among the enthusiastic supporters of the coding courses, along with several local principals.

Her son, she said, does well in school but had not quite found his special interest and was “not the fastest runner on the playground.” But he loves programming and spends at least an hour a week at CodeKids, after-school programs organized by MV Gate and held at three of Mill Valley’s five elementary schools.

James, 8, explained that programming is “getting the computer to do something by itself.” It is fun, he said, and, besides, if he gets good, he might be able to do stuff like get a computer to turn on when it has suddenly died. His mother said he had found his niche; when it comes to programming, “he is the fastest runner.”

Other youngsters seemed more bewildered, at least at first. “The Google guys might’ve been coders, and the Facebook guys — I don’t know,” said Sammy Smith, a vibrant 10-year-old girl, when she arrived at the coding event at Strawberry Point.

But well into the session, she and her fifth-grade friends were digging in, moving basic command blocks to get the Angry Bird to its prey, and then playing with slightly more complex commands like “repeat” and learning about “if-then” statements, an elemental coding concept. The crowd had plenty of high-tech parents, including Scott Wong, director of engineering at Twitter. His 7-year-old son, Taeden, seemed alternately transfixed and confused by the puzzles on the laptop, while his 5-year-old brother, Sai, sat next to him, fidgeting.

The use of these word-command blocks to simplify coding logic stems largely from the work of the Massachusetts Institute of Technology Media Lab, which introduced a visual programming language called Scratch in 2007. It claims a following of millions of users, but mostly outside the schools.

Then, in 2013, came Code.org, which borrowed basic Scratch ideas and aimed to spread the concept among schools and policy makers. Computer programming should be taught in every school, said Hadi Partovi, the founder of Code.org and a former executive at Microsoft. He called it as essential as “learning about gravity or molecules, electricity or photosynthesis.”

Among the 20,000 teachers who Code.org says have signed on is Alana Aaron, a fifth-grade math and science teacher in the Washington Heights neighborhood of Manhattan. She heard about the idea late last year at a professional development meeting and, with her principal’s permission, swapped a two-month earth sciences lesson she was going to teach on land masses for the Code.org curriculum.

“Computer science is big right now — in our country, the world,” she said. “If my kids aren’t exposed to things like that, they could miss out on potential opportunities and careers.”

Correction: May 18, 2014
Because of an editing error, an article last Sunday about a national movement to teach computer programming referred incorrectly in some editions to the founder of Code.org, who favored the instruction. The founder, Hadi Partovi, is a man.
Send Us Your Feedback