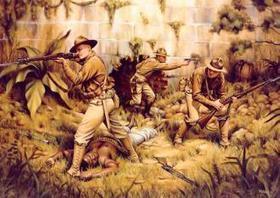 This year marks the 100 years since the beginning of the 19-year occupation of Haiti, and the Haitian struggle against U.S. rule.

Sourced through Scoop.it from: socialistworker.org

The occupation confronted powerful resistance from the peasantry, who organized into rebel armies known as cacos. According to mythology they were named after a fiery red bird, and this is why they wore patches of red material to identify themselves. From the initial invasion, cacos fought the marines. Like their marroon ancestors, they used conch shells to communicate, and gathered in the mountains to plot against the hated invaders. The occupying army followed a policy of “vigorous pursuit and decimation,” and used all the latest in weaponry against the hoes, sticks, and stones of the Haitian peasants. In a single battle at Fort Rivière, 200 cacos were killed; there were no American casualties. Butler talked of his men hunting the cacos like pigs (he was awarded a medal by President Roosevelt for this). By the fall of 1915, the first caco resistance was crushed. But after the imposition of forced labor, the cacos came back in even greater numbers and the scattered resistance turned into full-scale revolt. The corvée was officially terminated, but the rebellion was not able to end the occupation. Rebel leader Charlemagne Peralte organized a provisional government in the north and thousands of Haitians fought alongside him-some estimates suggest as many as 15,000 at the height of resistance-but the American government and military maintained the myth throughout that opposition was restricted to an elite minority.