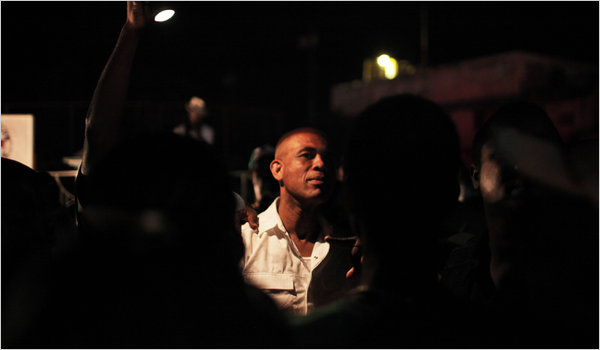 PORT-AU-PRINCE, Haiti — Michel Martelly, the presidential candidate whose partisans have fiercely protested election results they consider rigged, said in an interview on Friday that he had rejected an offer to participate in a runoff election as a third candidate.

“This would be like fraud to be in a second round by invitation,” he said. “I want to either win or lose.”

Mr. Martelly, a popular singer who holds considerable power to defuse the electoral crisis paralyzing this country, spent Friday in his gated house strategizing with advisers and analyzing that he described as “several propositions” put forth by mediating parties.

The country remained shuttered, its schools, offices and international airport closed, but the demonstrations abated along with much of the violence, allowing some activity to resume as people took advantage of the lull to clean up and stock up on food and water.

Mr. Martelly called it a day of “refueling,” and said he hoped to announce on Saturday what he intended to do next and whether he would agree to participate in a recount, as proposed Thursday by the national electoral council.

“I hope we can start a peaceful process where we can find a real solution,” he said.

Many here feared, however, that demonstrations and clashes could resume on Monday.

The council had released preliminary election results on Tuesday that were widely considered suspect, with Mr. Martelly coming in third, after Mirlande Manigat, a former first lady, and Jude Célestin, a little-known government executive who is President René Préval’s chosen successor. If the results withstood challenges, Ms. Manigat and Mr. Célestin would face each other in a second round of voting on Jan. 16.

Mr. Martelly said “various organizations” were making proposals to resolve the impasse created by his rejection — and the other top candidates’ questioning — of the results. He would not specify which organizations, but he said the Haitian government was not among them and implied that diplomatic envoys were.

After its release of results sparked two days of unrest, the electoral council said Thursday it was willing to perform an audit of the vote tally sheets and invited the three top vote-getters to participate along with national and international election observers.

Mr. Martelly indicated that he was reluctant to do so because of his deep mistrust of the electoral council, which he believes is manipulated by Mr. Préval. “If they are inviting me, I am pretty sure they have arranged it so they can knock me out again,” he said.

A spokesman for the electoral council said Wednesday that arrangements were being made for the retabulation of votes and the committee that would oversee it. It was unclear when the process would begin.

In Washington, Senator Patrick Leahy, Democrat of Vermont, said Friday that he had urged the Obama administration to suspend direct aid to the Haitian government and visas for senior Haitian officials because “those in power there are trying to subvert the will of the people.” Mr. Leahy heads the appropriation committee’s subcommittee on the State Department and foreign operations.