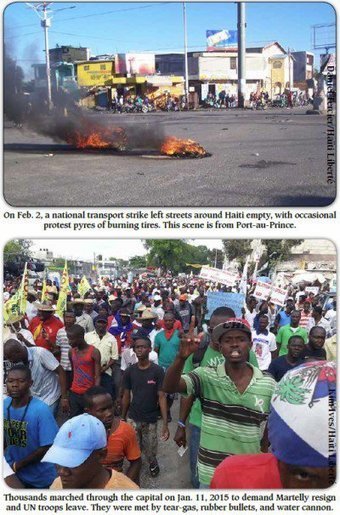 Port-au-Prince’s hilltop slum of Fort National offers a perfect example of the irony, agony, and struggle that grip Haiti today.

Its rocky moonscape is littered with piles of dirt, debris, and garb…

Every week, another delegation of officials from North America or Europe arrives to bring their support to the embattled Martelly regime. At the end of January, it was the UN Security Council and the Club of Madrid which made three-day visits. It is no surprise that former Bolivian President and Club of Madrid Vice-President Jorge Quiroga, on leaving Haiti on Jan. 28, called on MINUSTAH to “strengthen its presence in Haiti” and invited the UN, OAS, and European Union to send an “on-site mission to observe the electoral process.” Imperialist “observer” missions of this nature have intervened and screwed up Haitian elections in 2000, 2006, and 2011.

“Haiti’s deliverance will not come from the so-called international community,” said Henriot Dorcent, another Dessalines Coordination leader. “In fact, Haiti’s deliverance from poverty, injustice, and political instability will only come when the Haitian people stop them from meddling in our internal affairs. That is what we in KOD, and most of the Haitian people, are fighting for today.”