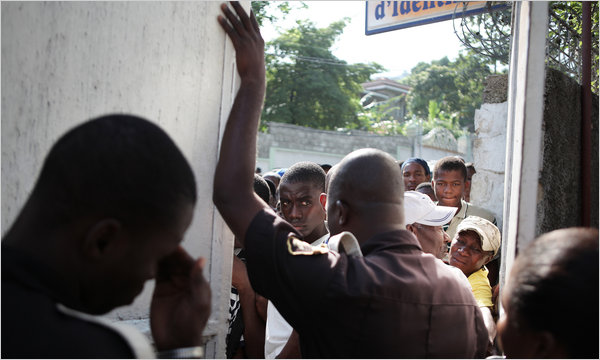 People waited outside an office in Port-au-Prince for a chance to pick up national ID cards, which are required for voting in Sunday’s presidential election. CreditDamon Winter/The New York Times

PORT-AU-PRINCE, Haiti — Crushed buildings from the January earthquake still spill out onto sidewalks here, people are collapsing from cholera at hospital doors and a wave of rioting last week reminded Haitians of political turmoil of the past.

It may not be the best time to choose a president.

“The nation is not in the mood for the election,” said one candidate, Leslie Voltaire, a former government minister, who, along with other candidates, has suggested that the vote be delayed.

But the election on Sunday may be Haiti’s most important in decades. Not only are competing crises demanding attention, but with the country poised to receive billions of dollars in international reconstruction money, the new president will have a historic ability to reshape the country, from its economy to its justice system to deciding where and how to house more than a million earthquake refugees.

A colorful field of 19 candidates is seeking the highest office in the hemisphere’s poorest country, including a professorial former first lady who would be the first woman elected president, a popular entertainer best known for dropping his pants on stage and a taciturn government minister handpicked by the current, increasingly unpopular president.

All but the last have offered forceful criticism of President René Préval’s response to the earthquake, promising careful, fraud-free management of the aid windfall, although providing few specifics.

For the most part the campaigns have focused on ginning up excitement, plastering brightly colored posters across the devastated capital, blasting catchy Caribbean-beat jingles from trucks and staging large rallies with T-shirt — and sometimes, money — giveaways. It was unclear whether the crowds had as much enthusiasm for the candidates as the freebies.

Emicile Bonhomme, 44, has a view from her refugee tent of the crumpled national palace, where hanging on a fence are black and white photos of the 19 contenders vying to occupy it.

She will have none of them, choosing God instead.

“Only God in the sky can do something for us,” she said. “Since Jan. 12 we have hoped, but nobody has come for us. Look at this home where we sleep on the ground.”

Distracted and distraught, citizens like Ms. Bonhomme are a large part of why José Miguel Insulza, the secretary general of the Organization of American States, says, “The big problem is to get out the vote.”

A low turnout — below 40 percent, according to some analysts — could raise claims that the election was illegitimate. Many people lost their national identification cards, which are required to vote, in the quake, while others fled Port-au-Prince and have not changed their registration.

The government authority that issues the ID cards said it had registered 30,000 more than the 400,000 it anticipated in the last quarter, the cutoff for the election. While some of that surge may be related to tighter banking rules, which also require the card for certain transactions, it may also reflect some electoral excitement.

Widner Saint-Jean, 24, beamed — “My heart is pounding,” he said — as he was handed a replacement identification card for one he lost in 2005.

“I hope my vote will help reconstruct the country, to change the lives of poor people,” he said. That would include himself. Like most young people here, Mr. Saint-Jean is unemployed.

Most candidates and political analysts doubt a clear winner will emerge on Sunday, setting up a runoff for the two leading candidates on Jan. 16 and extending what has been a campaign of careful steps, as candidates have tried to balance a show of concern for the nation’s calamities while trying not to appear to be exploiting them.

Charles Henri Baker, an unabashed member of the country’s business elite who is running again after losing in 2006, said he had visited cholera wards to deliver supplies and empathize with the sick, not for the cameras.

Another candidate, Marlinde Manigat, the former first lady, recently insisted to an interviewer that a stop at a tent encampment for earthquake refugees was “just a visit,” not a campaign event. A campaign commercial for Mr. Voltaire shows long shots of the tent camps, unavoidable, he said, to make the point he would better manage relief.

Getting the electorate to focus on the election and not the country’s troubles remains a challenge. The cholera outbreak in particular is reshaping the race. It led to rioting last week, with crowds directing their anger at foreign troops blamed for bringing the disease, and several candidates are struggling to adapt.

Jacques-Édouard Alexis, a former prime minister from Gonaïves, one of the areas hardest hit by the epidemic, said he had curtailed campaigning there on the advice of medical professionals (although generally, cholera is not transmitted by casual contact). “We have to be careful with big rallies,” he said.

Ms. Manigat described a recent stop at a hospital with her entourage in which she decided not to enter the main treatment room for cholera patients. “I would not mind, but it is not appropriate to get 20 people in the room — for what?” she said. “I waved at the door. They were happy to see me.”

Polling here is considered sketchy, but the local news media have focused their attention on a handful of candidates.

They include Ms. Manigat; Jude Celestin, Mr. Préval’s preferred successor; and Michel Martelly, a kompa singer formerly known as Sweet Micky who draws large crowds and is banking on votes that might have gone to Wyclef Jean, the Haitian-American pop star who was barred from running by the country’s electoral commission.

Mr. Martelly, though, has struggled to explain away his penchant for dropping his pants on stage and why he should be taken seriously.

“I agree I am a novice in politics, not a politician,” he said in a late-night interview during an impromptu tour through a notorious slum, hoping to prove he was welcome there. “But I am proud I am not one.”

Even the establishment candidates promote themselves as outsiders.

Mr. Baker, the businessman, said he would bring order and discipline, even the return of the disbanded, once-feared army, to a country lacking one. “I am part of the elite but I am also someone who creates jobs,” he said.

Several candidates said privately that they believed the international community was awaiting the outcome of the election before committing to more aid.

American aid to the reconstruction effort was hung up in Congress for months until the delivery of $120 million this month, about a tenth of what was pledged to the Haiti Reconstruction Fund, and several other countries were also slow in delivering aid.

The candidates have not criticized those countries, focusing instead on Mr. Préval, who is completing a second term and barred from running for another.

They also promise to wean the country off the influence of the myriad nongovernmental organizations that function here as almost a shadow government.

“Relative to presidents of the past, this president is going to have an enormous opportunity with significant resources,” said Mark L. Schneider, a Haiti expert at the International Crisis Group. “The challenges are mind boggling; you have to reconstruct the government. This isn’t just rebuilding infrastructure, it’s rebuilding whole institutions.”

It remains to be seen how much the voters are buying. Haitians, analysts said, tend to make their choices at the last minute.