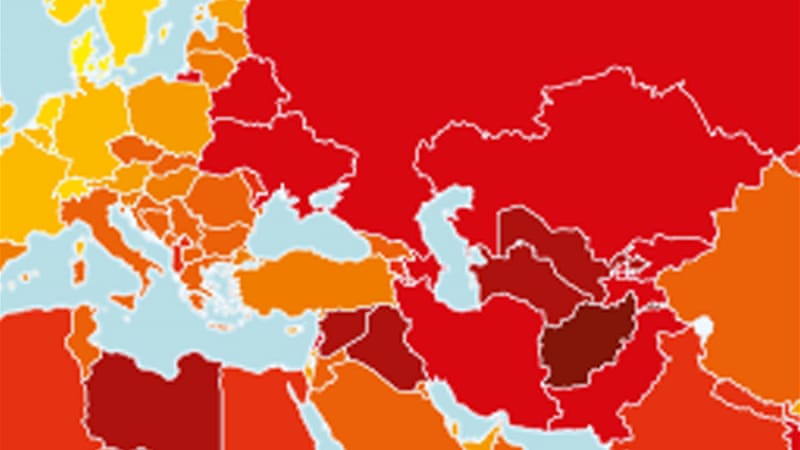 Corruption is by far not the main factor behind persisting poverty in the Global South.

Transparency International recently published their latest annual Corruption Perceptions Index (CPI), laid out in an eye-catching map of the world with the least corrupt nations coded in happy yellow and the most corrupt nations smeared in stigmatising red. The CPI defines corruption as “the misuse of public power for private benefit”, and draws its data from 12 different institutions including the World Bank, Freedom House, and the World Economic Forum.

This geographical division fits squarely with mainstream views, which see corruption as the scourge of the developing world (cue cliche images of dictators in Africa and bribery in India). But is this storyline accurate?

Many international development organisations hold that persistent poverty in the Global South is caused largely by corruption among local public officials. In 2003 these concerns led to the United Nations Convention against Corruption, which asserts that, while corruption exists in all countries, this “evil phenomenon” is “most destructive” in the global South, where it is a “key element in economic underperformance and a major obstacle to poverty alleviation and development”.

There’s only one problem with this theory: It’s just not true.

According to the World Bank, corruption in the form of bribery and theft by government officials, the main target of the UN Convention, costs developing countries between $20bn and $40bn each year. That’s a lot of money. But it’s an extremely small proportion – only about 3 percent – of the total illicit flows that leak out of public coffers. On the other hand, multinational companies steal more than $900bn from developing countries each year through tax evasion and other illicit practices.

This enormous outflow of wealth is facilitated by a shadowy financial system that includes tax havens, paper companies, anonymous accounts, and fake foundations, with the City of London at the very heart of it. Over 30 percent of global foreign direct investment is booked through tax havens, which now collectively hide one-sixth of the world’s total private wealth.

This is a massive – indeed, fundamental – cause of poverty in the developing world, yet it does not register in the mainstream definition of corruption, absent from the UN Convention, and rarely, if ever, appears on the agenda of international development organisations.

With the City of London at the centre of the global tax haven web, how does the UK end up with a clean CPI?

The question is all the more baffling given that the City is immune from many of the nation’s democratic laws and free of all parliamentary oversight. As a result of this special status, the City of London has maintained a number of quaint plutocratic traditions. Take its electoral process, for instance: More than 70 percent of the votes cast during council elections are cast not by residents, but by corporations – mostly banks and financial firms. And the bigger the corporation, the more votes they get, with the largest firms getting 79 votes each. This takes US-style corporate personhood to another level.

To be fair, this kind of corruption is not entirely out of place in a country where a feudalistic royal family owns 120,000 hectares of the nation’s land and sucks up around £40m ($65.7m) of public funds each year. Then there’s the parliament, where the House of Lords is filled not by election but by appointment, with 92 seats inherited by aristocratic families, 26 set aside for the leaders of the country’s largest religious sect, and dozens of others divvied up for sale to multi-millionaires.

Corruption in US is only slightly less blatant. Whereas congressional seats are not yet available for outright purchase, the Citizens United vs FEC ruling allows corporations to spend unlimited amounts of money on political campaigns to ensure that their preferred candidates get elected, a practice justified under the Orwellian banner of “free speech”.

The UN Convention is correct to say that poverty in developing countries is caused by corruption. But the corruption we ought to be most concerned about has its root in the countries that are coloured yellow on the CPI map, not red.

The tax haven system is not the only culprit. We know that the global financial crisis of 2008 was precipitated by systemic corruption among public officials in the US who were intimately tied to the interests of Wall Street firms. In addition to shifting trillions of dollars from public coffers into private pockets through bailouts, the crisis wiped out a huge chunk of the global economy and had a devastating effect on developing countries when demand for exports dried up, causing massive waves of unemployment.

A similar story can be told about the Libor scandal in the UK, when major London banks colluded to rig interest rates so as to suck around $100bn of free money from people even well beyond Britain’s shores. How could either of these scandals be defined as anything but the misuse of public power for private benefit? The global reach of this kind of corruption makes petty bribery and theft in the developing world seem parochial by comparison.

But this is just the tip of the iceberg. If we really want to understand how corruption drives poverty in developing countries, we need to start by looking at the institutions that control the global economy, such as the IMF, the World Bank and the World Trade Organisation.

During the 1980s and 1990s, the policies that these institutions foisted on the Global South, following the Washington Consensus, caused per capita income growth rates to collapse by almost 50 percent. Economist Robert Pollin has estimated that during this period developing countries lost around $480bn per year in potential GDP. It would be difficult to overstate the human devastation that these numbers represent. Yet Western corporations have benefitted tremendously from this process, gaining access to new markets, cheaper labour and raw materials, and fresh avenues for capital flight.

These international institutions masquerade as mechanisms for public governance, but they are deeply anti-democratic; this is why they can get away with imposing policies that so directly violate public interest. Voting power in the IMF and World Bank is apportioned so that developing countries – the vast majority of the world’s population – together hold less than 50 percent of the vote, while the US Treasury wields de facto veto power. The leaders of these institutions are not elected, but appointed by the US and Europe, with not a few military bosses and Wall Street executives among them.

Joseph Stiglitz, former chief economist of the World Bank, has publicly denounced these institutions as among the least transparent he has ever encountered. They also suffer from a shocking lack of accountability, as they enjoy special “sovereign immunity” status that protects them against public lawsuit when their policies fail, regardless of how much harm they cause.

If these patterns of governance were true of any given nation in the global South, the West would cry corruption. Yet such corruption is normalised in the command centres of the global economy, perpetuating poverty in the developing world while Transparency International directs our attention elsewhere.

Even if we do decide to focus on localised corruption in developing countries, we have to accept that it does not exist in a geopolitical vacuum. Many of history’s most famous dictators – like Augusto Pinochet, Mobutu Sese Seko, and Hosni Mubarak – were supported by a steady flow of Western aid. Today, not a few of the world’s most corrupt regimes have been installed or bolstered by the US, among them Afghanistan, South Sudan, and the warlords of Somalia – three of the darkest states on the CPI map.

This raises an interesting question: Which is more corrupt, the petty dictatorship or the superpower that installs it? Unfortunately, the UN Convention conveniently ignores these dynamics, and the CPI map leads us to believe, incorrectly, that each country’s corruption is neatly bounded by national borders.

Corruption is a major driver of poverty, to be sure. But if we are to be serious about tackling this problem, the CPI map will not be much help. The biggest cause of poverty in developing countries is not localised bribery and theft, but the corruption that is endemic to the global governance system, the tax haven network, and the banking sectors of New York and London. It’s time to flip the corruption myth on its head and start demanding transparency where it counts.

Transparency International recently published their latest annual Corruption Perceptions Index (CPI), laid out in an eye-catching map of the world with the least corrupt nations coded in happy yellow and the most corrupt nations smeared in stigmatising red. The CPI defines corruption as “the misuse of public power for private benefit,” and draws its data from twelve different institutions including the World Bank, Freedom House, and the World Economic Forum.

Dr Jason Hickel lectures at the London School of Economics and serves as an adviser to /The Rules.