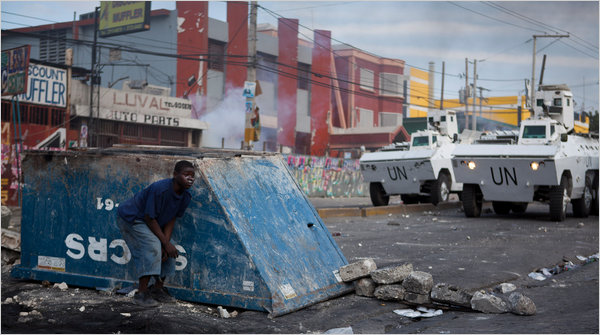 PORT-AU-PRINCE, Haiti — Violent protests, ignited by preliminary presidential election results that were widely considered suspect, shut down this troubled country on Wednesday and threatened the fragile stability that has held since the devastating Jan. 12 earthquake.

Businesses and schools were shuttered, streets emptied of traffic and the international airport closed. Angry protesters set fire to the party headquarters of President René Préval’s chosen successor, and many hundreds marched on the electoral council offices, where United Nations peacekeeping troops repelled them with tear gas, rubber bullets and flash-bang grenades.

Protesters barricaded streets with heaps of earthquake rubble and burned hundreds of tires, sending plumes of black smoke into the air. The marches and clashes flared episodically, interrupting an otherwise eerie stillness with chanting, drums, gunfire and sirens. Haitian radio reported that four protesters had been killed.

The unrest was provoked by the national electoral council’s announcement late on Tuesday that Mr. Préval’s protégé — a former state construction company executive named Jude Célestin — had edged out a popular singer, Michel Martelly, for a spot in a January runoff against Mirlande Manigat, a former first lady.

On Wednesday afternoon, Mr. Préval, whose leadership since the earthquake has been disparaged as ineffective, appealed for calm as the crisis showed no sign of abating. Mr. Préval, who is finishing his second term and ineligible for a third, said the election should be challenged through legal means, not in the streets. “It is not through disorder that we will find the true results,” he said.

The election results released Tuesday night showed Ms. Manigat, a university administrator admired for her intellect, with 31.4 percent of the vote, Mr. Célestin with 22.5 percent, and Mr. Martelly, seen as an anti-establishment candidate, with 21.8 percent. If the results withstood challenges, Ms. Manigat and Mr. Célestin would head into a runoff on Jan. 16. (A candidate needed 50 percent of the vote to win in the first round.)

But even before the results were announced, Mr. Martelly had vowed to challenge them, and many who took to the streets on Wednesday waved pink campaign posters with his picture and nickname, Bald Head.

Reached by telephone on Wednesday morning, Mr. Martelly declined to speak about how he would proceed. Later in the day, he publicly asked his supporters to demonstrate without violence.

Senator Lambert asserted that “the international community” had pressured the electoral board to create “diplomatically engineered” results because they feared instability. He also said Mr. Célestin’s Unity Party was doing its best to keep his supporters in the rough slum called Cité Soleil from pouring into the streets. “If we cannot hold them back, prepare yourself for civil war,” Senator Lambert said.

Even Ms. Manigat, the frontrunner, said she did not trust the election results. Calling for an independent evaluation of the polling, she said on Haitian radio that she believed that she had received more votes than the electoral council had acknowledged.

The Nov. 28 elections were marred by disorganization, voter intimidation, the ransacking of polling stations and fraud. Mr. Préval said Wednesday that the election had been deemed valid by international observers. But an electoral observation mission from the Organization of American States and the Caribbean countries gave a less than resounding endorsement, saying it did not believe the “irregularities, serious as they were, necessarily invalidated the election.”

Twelve of the 18 presidential candidates had called for the election’s cancellation even before the polls closed. And one candidate, Leslie Voltaire, an architect, said Wednesday that he and others believe now more strongly than ever that the elections should be voided.

“The only possible other way we can get out of this mess is if Célestin retreats and lets Micky inside,” said Mr. Voltaire, referring to Mr. Martelly by his band name, Sweet Micky. “Micky is the real big surprise — the phenomenon — of this election.”

Foreign countries and international organizations proceeded cautiously to question the election results while calling for an orderly resolution. On Wednesday, the secretary general of the United Nations, Ban Ki-moon, voiced serious concern about election irregularities in Haiti, his spokesman said.

Shortly after the preliminary results were released, the United States Embassy had expressed its own skepticism about the election results’ “irregularities” and inconsistency with the findings of an independent Haitian group that had posted thousands of electoral observers throughout the country. The group found Ms. Manigat and Mr. Martelly to be the front-runners.

Faith in Haiti’s electoral council, seen as controlled by President Préval, has been shaky from the start. After it declared Wylef Jean, the Haitian-American hip-hop star whose declared candidacy provoked considerable excitement here, ineligible to run for president, many of his supporters transferred their allegiance to Mr. Martelly, a political novice. But they often said the authorities would not permit him to win.

Many Haitians did not dare venture outside their homes — or tent camps — on Wednesday. Many have lost faith that any candidate can deliver them from their misery, including Jean-Claude Gouboth, whose soft-drink shop was destroyed first by the earthquake and then, when rebuilt, by Hurricane Tomas.

“I understand that people are so frustrated and that they have waited all year to find a vehicle to vent their frustration,” Mr. Gouboth said by telephone. “But politicians have always deceived us, and it’s not worth burning down the town for them.”