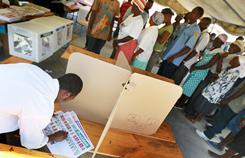 Add it to Haiti’s list: Already reeling from a catastrophic earthquake, one of the world’s poorest economies, storms, a deadly cholera epidemic and unrest over U.N. peacekeepers, the Caribbean nation could now be on the edge of full-on political turmoil.

The chaos in Sunday’s voting united most of the top presidential candidates against the president’s heir apparent — Jude Celestin, head of the state-run construction company and beneficiary of a well-financed campaign.

Allegations ranging from outright fraud to polling-place disorganization that disenfranchised many Haitians nearly brought the election to a halt. Polling places opened late, voters could not find their names on lists, and some polling places were ransacked by thugs.

The United Nations cited “numerous incidents that marred the elections.” Observers from the Organization of American States canceled an afternoon news conference, releasing a statement hours later that they were “in the process of evaluating and analyzing the information gathered.”

The discontent boiled into a potential political crisis at about 2 p.m., when 12 of the 19 presidential candidates — including nearly every major contender — gathered in a hotel ballroom to join hands, denounce President Rene Preval and call for the election to be canceled.

“It is clear that the government of Rene Preval, in agreement with the (electoral council), is putting into execution the plan hatched to tamper with the elections … with the help of the official political party and its candidate, Jude Celestin,” independent candidate Anne Marie Josette Bijou read aloud.

The other candidates joined the crowd in applause. The crowd, which had burst into Haiti’s national anthem