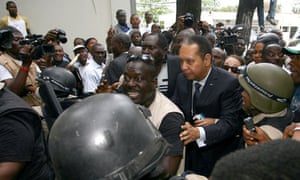 Two days after his return to the country he left following a brutal 15-year rule, a noisy crowd of his supporters protested outside the state prosecutor’s office while he was questioned over accusations that he stole public funds and committed human rights abuses after taking over as president from his father in 1971.

“His fate is now in the hands of the investigating judge. We have brought charges against him,” said Port-au-Prince’s chief prosecutor, Aristidas Auguste.

He said his office had filed charges against Duvalier, 59, of corruption, theft, misappropriation of funds and other alleged crimes committed during his period in power.

The charges must now be investigated by the judge who will decide whether a criminal case should go ahead. After several hours of questioning, Duvalier left the prosecutor’s office but was ordered to remain in the country at the disposition of judicial authorities. “He doesn’t have the right to go anywhere,” investigating judge Carves Jean said.

Dozens of officers, including some in riot gear, had whisked him earlier from his hotel past a jeering and cheering crowd and into a 4×4 with tinted windows – a scene which his regime’s victims had long dreamed of. He, who was not handcuffed, appeared calm and did not say anything. He had been due to give a press conference to explain his return from 25 years in exile.

Crowds immediately thronged the courthouse in expectation of a historic hearing.

Amnesty International and Human Rights Watch, among others, have urged the authorities to prosecute the former dictator for jailing, torturing and murdering thousands of people during his time in power. His longtime companion, Veronique Roy, when asked whether Duvalier was being arrested, simply laughed and said nothing.

The scene evoked memories of 7 February 1986 when crowds danced in the streets after widespread revolts and international pressure led to his departure.

His Swiss-banked fortune long used up in divorce and tax disputes, Duvalier returned to Haiti without warning on Sunday on a flight from Paris, saying he wanted to help. “I’m not here for politics. I’m here for the reconstruction of Haiti.”

A spokesman for the UN high commissioner for human rights said it should be easier to prosecute Duvalier in Haiti because it was where atrocities took place but that the judicial system was fragile.

It remained unclear why he returned and what impact it would have on the year-long post-quake crisis which has left a leadership vacuum and a country in ferment, with near daily street demonstrations by rival factions.