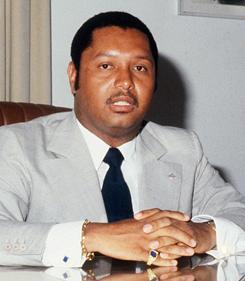 PORT-AU-PRINCE, Haiti (AP) — Former Haitian dictator Jean-Claude “Baby Doc” Duvalier ensconced himself Monday in a high-end hotel following his surprise return to a country deep in crisis, leaving many to wonder if the once-feared strongman will prompt renewed conflict in the midst of a political stalemate.

Duvalier met with allies inside the hotel in the hills above downtown Port-au-Prince and spoke publicly only through emissaries, who gave vague explanations for his sudden and mysterious appearance — nearly 25 years after he was forced into exile by a popular uprising against his brutal regime.

Henry Robert Sterlin, a former ambassador who said he was speaking on behalf of Duvalier, portrayed the 59-year-old former “president for life,” as merely a concerned elder statesmen who wanted to see the effects of the devastating Jan. 12, 2010, earthquake on his homeland.

“He was deeply hurt in his soul after the earthquake,” Sterlin said. “He wanted to come back to see how is the actual Haitian situation of the people and the country.”

Duvalier — who assumed power in 1971 at age 19 following the death of his father, Francois “Papa Doc” Duvalier — still has some support in Haiti and millions are too young to remember life under his dictatorship. But his abrupt return Sunday still sent shock waves through the country, with some fearing that his presence will bring back the extreme polarization, and political violence, of the past.

“Part of what he does by getting back into Haiti is bring back the old battle lines,” said Jocelyn McCalla, a political analyst and former director of the National Coalition for Haitian Rights. “People are going to start talking about being pro- or anti-Duvalier … It intensifies the instability.”

State Department spokesman P.J. Crowley said in a Twitter post that the U.S. was surprised by the timing of Duvalier’s visit. “It adds unpredictability at an uncertain time in Haiti’s election process.”

President Rene Preval, a former anti-Duvalier activist, made no immediate public statements on the former dictator’s re-emergence, though he told reporters in 2007 that Duvalier would face justice for the deaths of thousands of people and the theft of millions of dollars if he returned.

Prime Minister Jean-Max Bellerive said he is aware of the accusations but that an arrest is unlikely anytime soon. “We want to be a government that respects the law and to arrest somebody you have to a judiciary process,” he said.

At the moment, at least, there are no pending charges against the former dictator. In fact, National Police for a time guarded him at the upscale Hotel Karibe before withdrawing, leaving security to hotel guards and a few U.N. peacekeepers stationed outside.

The government of France, where Duvalier has spent most of his exile, said it had no advance notice of the trip.

Bobby Duval, a former soccer star who was starved and tortured during the 17 months he was held without charge by Duvalier in the notorious Fort Dimanche, was outraged that Haitian authorities didn’t immediately arrest the former dictator. He recalls seeing people beaten, tortured and executed by being clubbed in the back of the neck.

“He is a murderer and a thief,” said Duval, who now runs an athletic training school for children. “A country that has no memory will repeat its same mistakes. I thought we were past that but I guess not since he hasn’t been arrested yet.”

Duvalier formed part of a father-and-son dynasty that presided over one of the darkest chapters in Haitian history, a period when thuggish government secret police force known as the Tonton Macoute stifled any dissent, torturing and killing opponents.

He came back on an Air France jet in a jacket and tie to hugs from supporters, waving to a crowd of about 200 as he climbed in an SUV and headed to a hotel with Veronique Roy, his longtime companion.

Later, Duvalier appeared on a balcony of the Karibe Hotel and waved to supporters and journalists outside. Roy told reporters at one point that “Baby Doc” would stay only three days in Haiti and was asked why he had returned now. “Why not?” she replied.

Once a teenage ruler, Duvalier is now a large, stocky man with graying hair. He sometimes seemed disoriented as he faced the crowd, as if he were struggling to keep his eyes open.

His return comes as the country struggles to work through a dire political crisis following the problematic Nov. 28 first-round presidential election.

Three candidates want to go on to a second round meant for two. The Organization of American States sent in a team of experts to resolve the deadlock, recommending that Preval’s candidate be excluded — and the arrival of Duvalier has at least briefly overshadowed speculation about how the government might respond. OAS Secretary-General Jose Miguel Insulza was scheduled to be in Port-au-Prince to meet with Preval on Monday.

OAS Assistant Secretary General Albert Ramdin said Monday that the organization has “noted with interest the return of Mr. Duvalier to Haiti — and the timing.”

“As to the impact on the elections of this return, or any other, let’s remember that the CEP (Provisional Electoral Council) has an electoral calendar that prescribes what happens next,” Ramdin said.

The country meanwhile is dealing with a cholera outbreak that has killed more than 3,500 people since October and more than 1 million people are living in crowded, squalid tent encampments after their homes were destroyed from the Jan. 12, 2010, earthquake.

At one of those camps, there was some enthusiasm for Duvalier’s return.

“I don’t know much about Jean-Claude Duvalier but I’ve heard he did good things for the country,” said 34-year-old Joel Pierre. “I hope he will do good things again.”

But the human rights groups Amnesty International and Human Rights Watch issued statements urging Haiti to hold Duvalier accountable for the torture and killing of civilians during his 15-year rule.

“The Haitian authorities must break the cycle of impunity that prevailed for decades in Haiti,” said Javier Zuniga, a special adviser at Amnesty International. “Failing to bring to justice those responsible will only lead to further human rights abuses.”

Brian Concannon, director of the Boston-based Institute for Justice & Democracy in Haiti, said Duvalier’s return certainly has the potential to further disrupt the country amid an electoral crisis and the stalled quake reconstruction.

“It will energize his supporters, many of whom have histories of substantial political violence. The failure to arrest him will be even more disruptive, as it will send a signal of impunity for political violence,” said Concannon, a former lawyer for President Jean-Bertrand Aristide, who was ousted in 2004 in a violent rebellion.

Haitians danced in the streets to celebrate the overthrow of Duvalier back in 1986, heckling the tubby, boyish tyrant as he drove to the airport and was flown into exile in France. Most Haitians hoped the rapacious strongman had left for good, closing a dark chapter of terror and repression that began under his late father in 1957.

But a handful of loyalists have been campaigning to bring Duvalier home from exile in France, launching a foundation to improve the dictatorship’s image and reviving Baby Doc’s political party in the hopes that one day he can return to power democratically. To their advantage is the fact that half the people in the country are younger than 21 — and weren’t alive during Duvalier’s rule.

Duvalier has been accused of pilfering millions of dollars from public funds and spiriting them out of the country to Swiss banks, though he denies stealing from Haiti

But there have been repeated suggestions Duvalier faces money problems. Swiss lawmakers in September approved a bill that would make it easier for the country to seize cash stashed by deposed dictators. The SDA news agency reported that Haiti would receive about $7 million seized from Duvalier.

The return baffled Haiti experts and has thrown the country’s entire political situation into question.

Aristide’s attorney in Miami, Ira Kurzban, said the ousted former president, who remains popular in Haiti, wants to come back to his homeland.

“His position is that he’s always had a right to his return,” he said.

Crowley — the State Department spokesman — said in a Twitter post that “We are not aware of any plans for former President Aristide to travel to Haiti.”